I feel relief, but it’s a guarded relief, because my mammograms have always been fine, even when I had a tumor. I leave in such a rush, I forget my X-rays and have to return to get them. At home, I shove the films behind my desk. Out of sight, out of mind. Well, sort of. The nagging knowledge that Christine’s doctor was proactive enough to order an MRI instead of a mammogram gnaws at any complacency I’d like to own.

A few days later, I watch a thin squirrel digging a hole in my sodden backyard mulch. The phone rings and draws me reluctantly back to my desk, my laptop, and the music software review I have to write. But first, the phone.

“Did you get your results?”

“It looks like—” Her voice cracks, “I’ve joined the club.”

My fake complacency, my onerous limbo shatters. “Oh. Shit.” I start to cry.

“That’s what I said when the doctor told me,” she says through sobs. “It showed up on the MRI, not on the mammogram.” Her doctor’s preventive action saved her life. My surgeon doesn’t think I need an MRI. 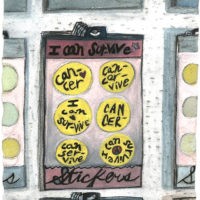 “Actually, there are several.” Several? My hands tremble. “The largest one is two centimeters.”

I forget the size of the children I delivered, but I never forget the size of my own tumor. Christine’s is bigger. I break out in a sweat. The blood drains from my face. She will need a mastectomy, chemotherapy, and hormone therapy. She will lose her hair, as if that’s important when she might lose her life. I wish I had a wand to wave it all away. Like many women I want to retreat into a fantasy land where magic can heal and turn confrontation into a calm conversation. Instead I rouse my dormant hope and force myself to believe in a complete recovery for Christine. And I resolve to renew my request for an MRI and genetic testing—a request which will become a demand if not granted.

Shortly after Christine’s diagnosis, I have my other checkup, this time with the surgeon. I dig out the mammogram ex-rays and pack them in a bag with a shopping list of items to buy for Annierose’s birthday party. In the consultation room the clock ticks off the seconds until the surgeon appears.

“Do you have any pain? Anything look or feel different?”

“No. Nothing I know of.” I clear my throat. “My sister, however, was recently diagnosed with breast cancer.”

“Oh. That’s unfortunate,” she responds. “Is she getting good medical care?”

“Yes. The prognosis is hopeful.”

“But first I want to tell you her tumor showed up on an MRI. Her doctor ordered it because I had breast cancer. I would like to have an MRI.”

“Let’s discuss it after the exam.”

Why not now, doctor? I lie down on the cold exam table, covered with a long sheet of thin paper that crinkles as I stare at the suspension ceiling. I want to trust my surgeon will give me the best care; after all, I trusted her with a knife to my breast. After an efficient physical exam and some scripted observations, she tells me everything looks fine. I can return in six months.

Hold on for a second. We are not in a classroom where you can dismiss me and send me home. I sit up. “My sister’s tumor appeared on the MRI and not on the mammogram,” I tell her. “Shouldn’t I have an MRI, too, along with my regular mammogram?”

“I don’t see any need to do an MRI. It’s not a recommended screening device for cases which are not high-risk.”

Not high-risk? Once you get breast cancer, do they bump you down to the end of the chorus line? Is high-risk a designation only for women who’ve never had breast cancer?

“You can get dressed now.”

All my other doctors leave the room while I put my clothes back on. Not her.

I turn my back as I put on my bra and shirt. “You didn’t recommend having the genetic testing done in the past.” I straighten my shoulders and turn to her. “But I want to have it.”

Her owl-like eyes pierce through her eyeglasses. “I don’t see why you want that.”

I scream silently. Because I want to know if I have embedded a potentially lethal gene in my daughter’s DNA! Why is she so stingy with tests? Is she getting a kickback from insurance companies?

“I have a daughter,” I say tersely.

“Yes. But the chances of testing positive are about five in one thousand.”

Five in one thousand. Isn’t it a covert way of saying one in two hundred? Invisible snare drums beat an angry rhythm in my head. I’d prefer the slow rhythm of a ballad. I want to wave goodbye, close the non-existent curtain, and abandon this scene so I can plan the activities for Annierose’s Tri-Wizard Tournament birthday party. Harry Potter’s magic world entices me to drop the thoughts of having the BRCA gene. I want to trust the surgeon’s statistics. But she is manipulating numbers and disregarding my requests. I was one of the eight. Who is she to determine I’m not one of two hundred? She will not coerce me into compliance. She will not design my destiny.

“Why did my sister have an MRI as a screening device simply because I had breast cancer? And why did her doctor recommend the genetic testing even though her only child is a boy?” The angry rhythm is modulating to a steady march.

The surgeon looks up from my medical chart, props her elbow on the tray, and points her pen at me, like Professor Snape about to cast a nasty spell. “I don’t know your sister’s history,” she says evenly. “MRIs are expensive and insurance companies are reluctant to approve them. MRIs often lead to unnecessary biopsies.”

The marching rhythm persists. I swallow the temptation to be the timid patient and to accept the doctor’s supposed superior judgment.

“I don’t want to have any more biopsies than I need,” I say. “But how can I trust a mammogram which has always been negative, even when there was an existing tumor?”

The surgeon shuffles the papers in my file until she finds what she’s looking for. Then she is quiet for a few seconds. “Since your mammogram was occult, I can submit a request for an MRI this time. But you’ll probably have to pay for it yourself.”

Occult. It sounds like dark magic. I remember looking the word up when my radiation oncologist talked about the need to continue with mammograms, even though mine was occult—hidden, difficult to see, concealed.

“It’s the same situation with the genetic testing,” she continues.

I am seething. I’ve seen the exorbitant costs hospitals charge. I am fortunate that I can pay for a test if needed, but my sister did not pay for her MRI or for her genetic test. And neither will I. I call the surgeon’s bluff.

“Alright. Then, let’s start with the MRI, even if I have to pay for it.”

After I leave the surgeon, I drive directly to Party Supplies to buy Harry Potter paper plates, a Gryffindor tablecloth, and Mad Lib books to fill the Hermione loot bags. Pay for my own genetic testing? Is that what she tells all her patients? I’m lucky I was born a rebel, that I defied my parents’ strict rules, that I rejected the Catholic church’s dogma, that I stood up to a sexist boss. It was good training for this medical journey I’m on. But I’m sad and outraged, thinking of all the women who don’t have access to this knowledge or my privilege.

There are no small Harry Potter banners or candles to decorate the cake. I’m not up to designing his face with tiny tubes of frosting. Elmo, Tinkerbell, Mickey Mouse—those were manageable. Not Harry Potter.

“Do you have any Harry Potter cake decorations,” I ask the skimpy goateed teenage clerk.

“No, ma’am, we don’t have anything like that,” he says and returns to the register. Ma’am. Mammogram. The surgeon’s words return. I can submit a request for you this time. Does she think I will say “Yes ma’am” to having an MRI only this time, and not any other time?

I choose a thick tube of black frosting to design a haunted building that will hopefully look like Hogwarts, and a purple tube for the school’s windows. Then, blue spray mist for the sky, green for the grass. I spy a package of stickers, Harry Potter’s eyes staring silently at me through his round glasses. Harry’s extended arm points at me. His eyes pierce through his glasses, my glasses, and lock on mine. The angry rhythm returns, this time on kettle drums. I’m not a wizard; I have no magic wand. I can either watch the movie from my spectator’s seat or I can write my own script. And my actions will affect my audience, my daughter, Annierose. I refuse to allow an owl-eyed surgeon to restrain my rights.

My hair goes limp as my head sweats out my fury.

Four words morph into a script I am already writing in my head.

I drop the pack of stickers into my shopping basket.

I’ll get my genetic testing.

And then I’ll get a new surgeon.