ECHO: A JOURNAL OF CREATIVE NONFICTION 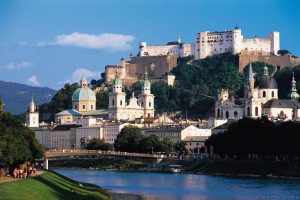 I didn’t want to miss my weekly adventure of playing the imposter. I pedaled faster, past the older couples dressed in dark green loden mäntel, the pinchy boiled-wool coats that traditional Austrians preferred to wear, especially in Salzburg. At the pedestrian bridge I dismounted my bicycle and half-walked/half-skipped along the metal platforms. The resonant cathedral bells reminded everyone, Catholics or not, that Sunday Mass would start in five minutes. The hazel colored Salzach River rushed below the bridge, as if it, too, were running late. At the bridge’s end I pressed up the incline that led to the Getreidegasse where Mozart was born and to the cathedral where he went to church. Now I, a student at the international music conservatory Mozarteum, was going to that same church.

My body juddered as I rode over the cobblestoned-square, where leder-hosen wearing drivers perched on their horse-drawn carriages, waiting for their next tourist fare. I locked my bike and joined the churchgoers marching into the cathedral. The vibrations from the cast iron bells resonated in the soles of my feet. I entered the church, pretending I was just another parishioner. The old pull of reverence and resistance tugged at my beliefs. I didn’t believe in sin or guilt anymore. I would not be punished for practicing a different religion during this Mass. Listening to God’s word was not my motive for attending Mass. I was there to listen and to breathe in the creations by Machaut, Bach and Dvorak that were performed every Sunday with full orchestra and choir. Today it was Haydn.

The Kyrie engulfed me in memories of a friendly first grade nun who oversaw my transition from a half year of kindergarten and a half year of first grade. I felt the soft polyester of my pious white dress at Holy Communion in second grade. In the third grade, Sister Joseph Catherine asked the class who still believed in Santa Claus. Only two kids raised their hands— a boy and me. There was something drastically wrong with the other kids. How could they not believe in Santa? In my protected childhood, my friends were my sisters, the neighbors on the street and the children of my parents’ Portuguese friends. My older sister and the Portuguese kids knew better than to snitch on Santa. Between kickball games and biking, there was no time for discussions of beliefs with the neighbors.

A month after Sister JC’s question, my parents thought it was time for me to know the real deal about Mr. Ho Ho. On my eighth birthday they whispered the conspiratorial secret that generations of parents continue to keep and pass down. I was crestfallen. The magic that had clothed my childhood slid away and left me naked in the rawness of reality.

“Does that mean the Easter Bunny isn’t real either?” I whispered tremulously, careful not to let my younger sister overhear.
They nodded, smiling. They were opening the gate into their adult world, something they saw as a privilege, and I, as a betrayal.

“And the Tooth Fairy, too?” I asked, my voice choking.
They nodded again.

My lungs filled with disbelief. My devout Catholic parents were telling me they had lied for years. What they’d taught me to believe in was a lie. The same parents who said lying was a sin. My sisters and I attended a Catholic grammar school. We were taught to believe in God, in Jesus, in miracles and salvation. Was that also a lie? Was God a lie? With one divulgence about the man in the red suit, they had crushed my ability to believe in anything that was not tangible. It was the beginning of the end of organized religion for me.

The parishioners’ shoes shuffled on the mosaic floor as they sat down after the Gospel reading. Although men removed their hats inside the cathedral, women retained theirs—traditional dark blue, gray or green, thick, felted hats, the crown dented into a point, a band of pressed or braided ribbon holding a treasured dried sprig of Edelweiss, or bird feathers, or the popular goat beard that looked like an upside down shaving brush.

My mind rambled, just like in the past, as the priest delivered his sermon. How many sermons had been forced on me at Masses my parents demanded I attend? How many lectures had they hammered into my head, pounding one more nail on the closing lid of Catholicism? Breaking away from my parents’ beliefs became my own crusade in my teen years. I still believed in a God, but not the Catholic way. During college we established a détente. They stopped sermonizing; I stopped harping on the church’s exclusion of gays, as were many of my musician friends, of divorcées like my older sister, and the anachronistic dogma which cast out young couples living together in sin—which included just about all my college friends.

The congregation stood to recite the Nicene Creed in German. Over the years, my concept of God had taken the form of a spirit until that too, evaporated. The strings played the Benedictus. I felt blessed in ways that had nothing to do with the church. I had found my spirituality in music. Playing piano was my confession stall where I professed my feelings. Mozart, Beethoven, Chopin—they were my gods.

I closed my eyes as the choir sang the Agnus Dei. The rich bass line grounded the altos’ and tenors’ tower of harmonies, capped with the clear soprano melody, like the Alps that surrounded Salzburg. These immovable foundations supported trails through fragrant fir and pine forests, opening onto Alpine meadows steeped in the sound of lowing cows and their dangling necklaces of bells. These green plateaus exhibited majestic snow-capped peaks that beckoned to every onlooker. Hiking these mountains filled me with the strength and awe of a higher power—nature itself.

The organist announced the recessional with a sustained major chord that devolved into a prelude and fugue by Bach. I joined the parishioners filing out of the cathedral. Outside, wafts of grilled Bratwurst drifted from food carts across the square. I pedaled across the bumpy cobblestones again. Along the shaded bike path, I zigzagged around the chestnuts strewn over the ground. I wanted to send my parents a postcard, to tell them that I was going to church every week, that even though I was not a Catholic, I had morals and a source of eternal strength. But I knew that would be pointless.

Decades later I told my children what I believed—that Santa was a spirit. Some people had that giving spirit of Christmas; others didn’t. My husband and I left the concept of God out of our childrearing. We had baptized our babies in a Protestant church; it wouldn’t harm them, and it comforted our families. Occasionally we attended Christian services that were milder than the Catholic Masses, but I always felt trapped. I couldn’t stay. And I couldn’t return.

My parents rarely dropped hints that our children should be learning about God, but when they did, I cast off my no longer needed rebellion and responded gently that my husband and I made sure they learned about the values of our upbringing. One evening, on the ride home from a family gathering, my children sat in the third row of the van, my parents in the middle row, my husband and I up front.

Our five-year-old son asked our nine-year-old daughter, “Annierose, who do you think God is?”
Annierose stopped singing and said, “I think—he’s like a spirit.”
Daniel thought about this, then asked, “You mean like Santa?”
Our daughter was quiet. After some time, she answered, “Yeah. But you don’t get the presents.”
I prayed my parents didn’t have their hearing aids on.

We do not punish our children for being truthful about their actions. We have chosen not to sow fear. The result is that they are honest with us. We have showed them the voluntary acceptance of forgiveness and the rewards of being kind. Out of caring for each other and our community, they are respectful and thoughtful. They are also risible, sometimes raucous and irreverent, all within comfortable boundaries. They don’t believe in God either, but their spirits are full of life. Those spirits have been fiercely tested by life’s experiences and have produced invaluable presents—love and resilience.

Mr. Ho Ho still swings by our house every Christmas Eve. I’m one of the persons I described to my kids; I have Santa’s giving spirit. I don’t have religion, but I have a soul that is replenished with music. I don’t have a church, but I have a community of friends and family, parents included, that has loved me unconditionally through insubordination and illness, dejection and joy.
What I have, is what I believe.