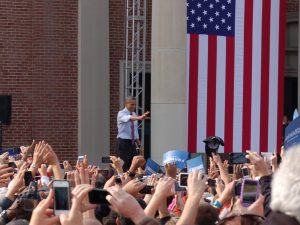 Born with a rebellious streak, Betty has resisted traditions and practices that she felt were unfair. This was not always easy for her conservative parents! Her first visit to Washington, D.C. was to protest the Gag Rule in the Regan era. The most recent visit took place in 2017 at the Women’s March on Washington. It turned out to be her television debut on the national evening news.

As a resister, Betty currently sends an action email every workday, to a group of 300 resisters focusing on combating the Trump  Administration’s destructive actions.

You are invited to attend the most anticipated event since 2016
Election Night, Tuesday, November 3rd, 2020

Dress Code
Hillary Clinton’s supporters wore white pantsuits to the polls in 2016. In pandemic-2020 no one cares what you wear. But don’t associate fashion apathy with voting apathy. That infamous election catapulted Americans from their leather recliners and switched their channels from passive observation to active participation. I know, because I am one of them.

Guests are welcome
The utopian years of the Obama presidency lulled me into a comfortable retreat from political activism. But on November 8, 2016, I vowed to oppose Donald J. Trump every day he occupied the White House. Friends asked me to share my daily actions. They told their friends, and through word of mouth, we now number 300-plus Americans nationwide, from Alaska to Florida, Kentucky to California. I wasn’t expecting a big crowd, but like a rogue high school party, it just kept growing.

Entertainment Show and Tell
Using my action alert template—concise synopsis with one doable act—share your favorite action from the past almost-four years (or memorabilia such as my Trump-face splat ball.) Please observe a two-minute limit for your presentation. If you go over, I will have to mute you, maybe, sort of—depends on how wimpy or courageous I feel. The wannabe-emperor’s decimation of environmental protections, callous lack of concern about Covid-19, bromances with despots like Putin and Bolsonaro, and attacks on equal rights for anyone who is not white, rich, Christian, heterosexual, handicapped or female have provided a plethora of decisions to defy.

My Most Memorable Actions:

Live Interaction
In my emails to you, I have restrained myself in referring to Republicans. Collectively we have inhaled deeply too many times to expel the venom of desire for revenge. On Election Night, unlock your closet full of Trumpnomers and text them in!
Text Code: TANGERINETYRANT

No Gifts Please
I am profoundly grateful for the gifts you have already bestowed—community, camaraderie, new friendships and slices of life from your home states. When I took time off for my husband’s cancer treatments, you buoyed my spirits. For my sixtieth birthday you overwhelmed me with $3,000 of donations to my daughter’s Juvenile Arthritis (a nineteen-year veteran) Fundraiser. Thank you.

Media
The media surprised me with gifts as well. My sign “Tweet Women with Respect” for the Women’s March on Washington went viral. I am delighted to see it popping up in protests. And I’ll never forget my debut on national television as the 7:00 news anchor reported about Trump’s first full day in office, which was “met by one of the largest inauguration-related demonstrations. . . mostly women. . . this woman echoing today’s themes of solidarity and defiance” and then flashed a photo of Yours Truly with my sign.

What Remains to Be Done
The post-election roar of anger launched my first published personal essay, “Donald Trump Is Cancer” in Entropy. Trump’s election provoked the same reactions I had to my three cancer diagnoses—panic, indulgence in wine and chocolate, followed by a determination to do everything possible to banish the beast from my life. Like radiation, this administration burned through the progressive accomplishments of the last eight years. I read every report. Like chemotherapy, 45’s distasteful tactics to repel immigrants and his pompous promotion of America as a superior power to our allies induced constant nausea. One treatment protocol remains—surgery. We must excise Trump from the White House. Only then will we have gutted the immediate political threat to our country’s health. But as a survivor I have no illusions that I, or this country, will be cured. Evil can lie dormant, waiting for a new malignancy to trigger a recurrence. We must remain vigilant.

What to bring
Aspirin to relieve the headaches of listening to pundits.
Binoculars to read the electoral map as our eyesight weakens with the waning of the night.
Commitment to continued activism to prevent another Trump.
Most important— bring Hope. Hope that nations will forgive the U.S. for 45’s ignorance. Hope that immigrant families will be reunited and treated as the human beings they are. Hope that a rational approach to the coronavirus will halt the deadly desolation. Hope that politicians will acknowledge the insidious racism in our country and act to abolish this stain on America.

So join me on Tuesday and let’s raise a glass to Hope, not just for Election Night, but for the years to come. Cheers!

How Mike Pence Changed Me From a Hater Into a Lover

I used to hate you but now I love you
Because you know how to find real shit—and you eat it
Because you have not only one, but TWO red eyes
Because the sound of your name defines you—you fly, you lie

Because your humble origins begin as an ovum placed on carrion, dung or food waste, then turn into a crawling maggot, then cocoon in a pupa and emerge as a full adult
Because for nourishment you vomit on any pabulum, regurgitate it, suck it up and feed on it
Because you live in humble dumpsters and port-a-potties
Because you abandon polluted water sources

Because you’ve inspired unforgettable movies and scenes—The Fly, Amityville Horror and literary masterpieces of evil—The Lord of the Flies
Because you are a superspreader of dysentery, food poisoning, COVID-19?
Because you annoy and distract real humans
Because you are attracted to Aqua Net For Men. ❏

Elizabeth Reed is an author, musician, political activist and traveler who has visited over 45 countries with her husband and one or two children in tow.

A few weeks ago I grabbed my raincoat as I ran out the door to attend my son’s orchestra concert. It wasn’t cold enough for a hat, but it was cool enough for gloves. When I searched my coat pockets, I found a plastic spider I’d forgotten to hang up on our web-covered bushes at Halloween and a campaign pin—a picture of Hillary Clinton with smart, ready, tested written on it. Halloween and autumn canvassing in New Hampshire felt like a lifetime ago.

As the concert music started I let Beethoven’s symphony wrap around me like a mantle of the determination that embodied him. Beethoven always carried a notebook in his pockets to jot down musical ideas, and later when he was completely deaf, to communicate with others in writing. He resisted against his deafness; he fought it in the best way he could—by composing one masterpiece after another. Beethoven showed us that silence is not the answer. His determination made me realize we must take our hands out of our pockets and resist. Read more 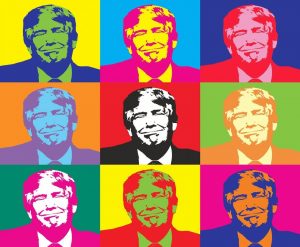 The day after the election of Donald J. Trump I relived the day I received my first cancer diagnosis, ten years ago. This is what happens. I gape at the results—a malignancy has invaded my life. I sob. Nausea overwhelms me. My head pounds with a pressure headache. I cannot pause my mind’s loop tape—yesterday’s future is suddenly, shockingly at risk. I troll the internet, hunting down facts. I call my sisters and we cry. I pull the threads of my house around me to create a cocoon. I acknowledge the insidious hate this monster has spawned and vow to expel the venomous anger coursing through my veins. I drink too much wine at dinner. Controlling the angst is a herculean task that requires music and chocolate. At my piano I play Bach, whose pieces are intricate statements of peace. I eat a gigantic brownie for lunch. Read more